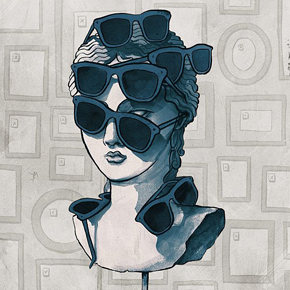 It is no secret that we absolutely love illustrations. Time and time again we have written articles showcasing superb illustrations from talented artists, and we plan to keep on doing that, so as to have an excuse to sit and stare at pretty things all day long.

Today, we will be gawking at Ben Marriott’s lovely illustrations, and talking a bit about them, as well, so that maybe we will be able to provide you with a bit of design inspiration for your own projects. But first, let’s get to know Ben a little bit better.

Ben’s an Aussie graphic designer and illustrator, based in Sydney, which he calls “the city of sunshine and sandwiches. He draws inspiration from many things, but the three things that inspire him most are absurd song lyrics, phrases out of context, and ridiculous scenarios, in general.

He loves making people laugh, so most of his works are comical in nature, and they really are sweet, wholesome illustrations that look gorgeous. By his own admission, he doesn’t draw simply for the sake of creating an image. He tries to illustrate an idea -be it smart or silly, but never safe- and infuse as much personality into his drawings as he can.

You can see him explain his work process by watching the video linked here.

And now, on to the artist’s illustrations. 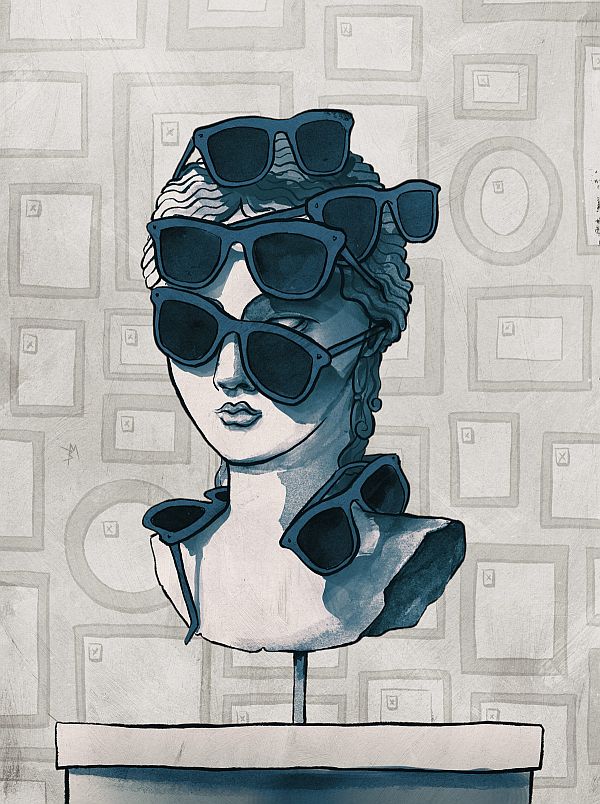 Aside from being an awesome name for an indie band, The Previous Evening is a great illustration of a scenario. It is supposed to represent the idea of being hungover after a long night of partying hard, hence the large number of sunglasses the bust is wearing.

The basic premise is trying to look classy and composed (like a bust), but failing to do so because, let’s face it, last night did quite a number on you. 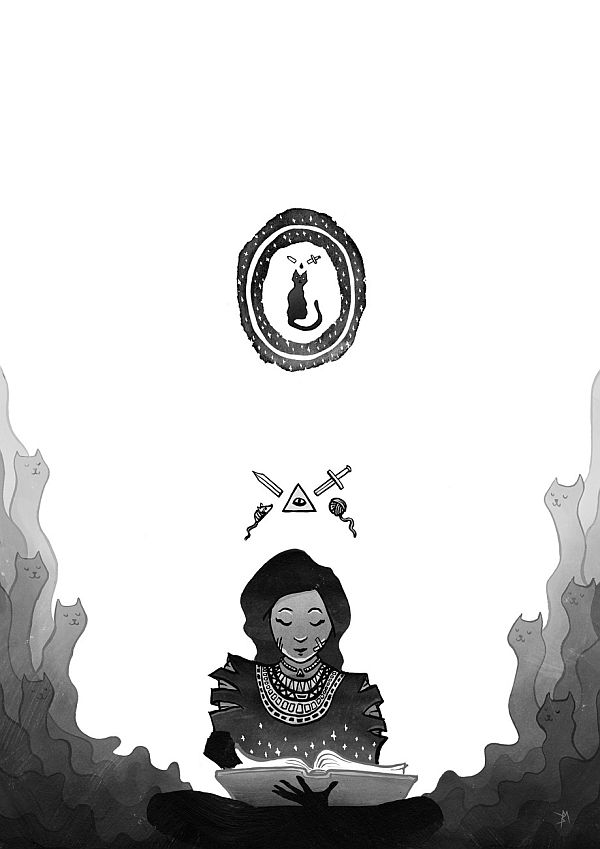 Witches are generally regarded as being “cat persons” who read arcane manuscripts, brew weird concoctions out of plants and animal bodyparts, and have long noses with singular warts on them. Here we explore the “cat person and arcane manuscript” side of witches, doing away with the negative stereotypes cauldron-cooking and lacking personal hygiene.

Instead, we have a pretty witch summoning cat spirits, without any frightening aspects of “witching” being replaced by funny symbolism (see the toy mouse and ball of yarn, coupled with the Illuminati pyramid).

3. The War of the Worlds 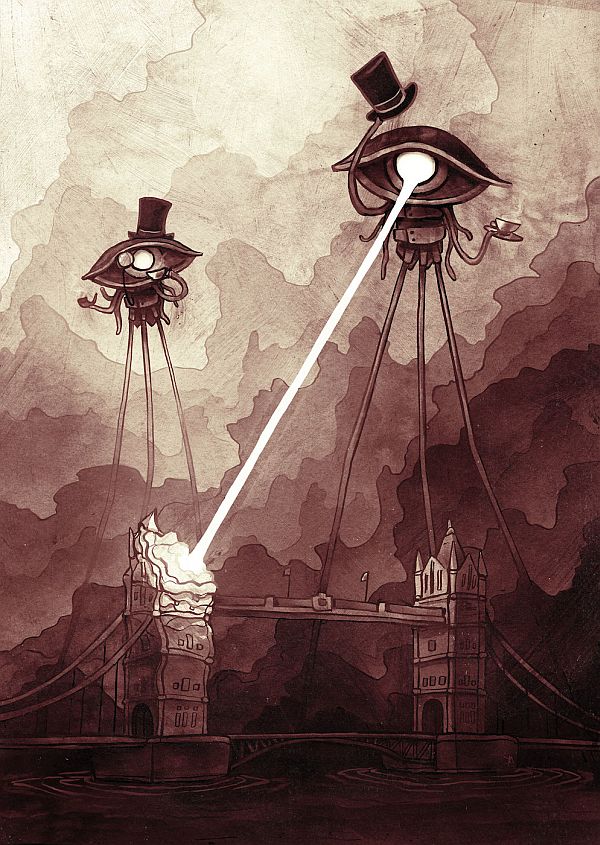 You know we are suckers for anything steampunk, especially steampunk illustrations, so Ben’s illustration inspired by H.G. Wells’ famous book instantly caught our eye. This is a work he done for Affectors’ The Art of Storytelling Exhibition, and it features the iconic London Bridge being destroyed by posh Martian tripod gentlemen. “Cheerio and pip-pip” the Martians seem to say “Pardon us as we wreak havoc on your fair city, old chaps”. Always keep a stiff upper lip, as they say. 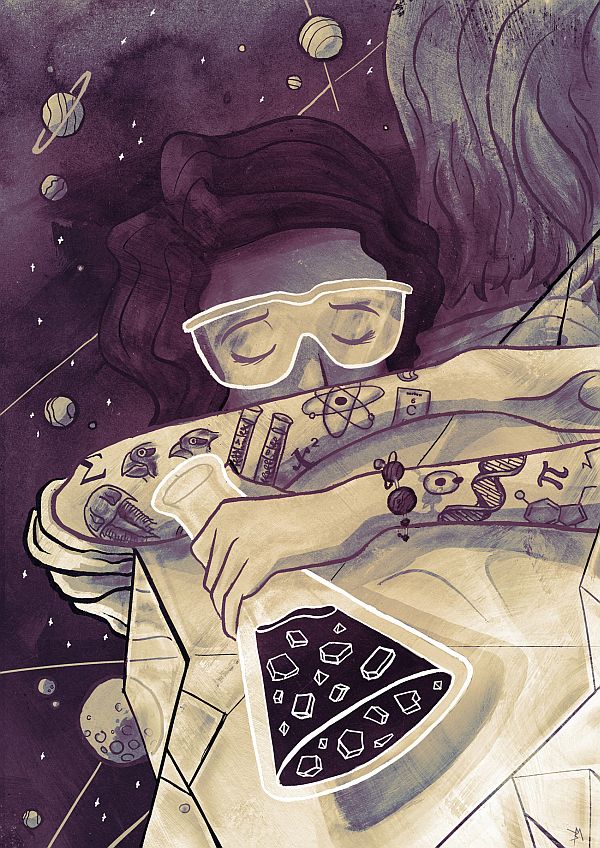 If you’ve clicked the link we provided earlier, when talking about Ben’s creative process, then you know this is the illustration being made in the video. We really love this drawing because it is about passion and love, and those are the forces that drive progress.

To break it down a little, in case you haven’t seen the video, the illustration is about the joy of discovery, and it even inspired an actual scientist to ask the artist to design a tattoo for him to get, which you can see by clicking this image’s source link. 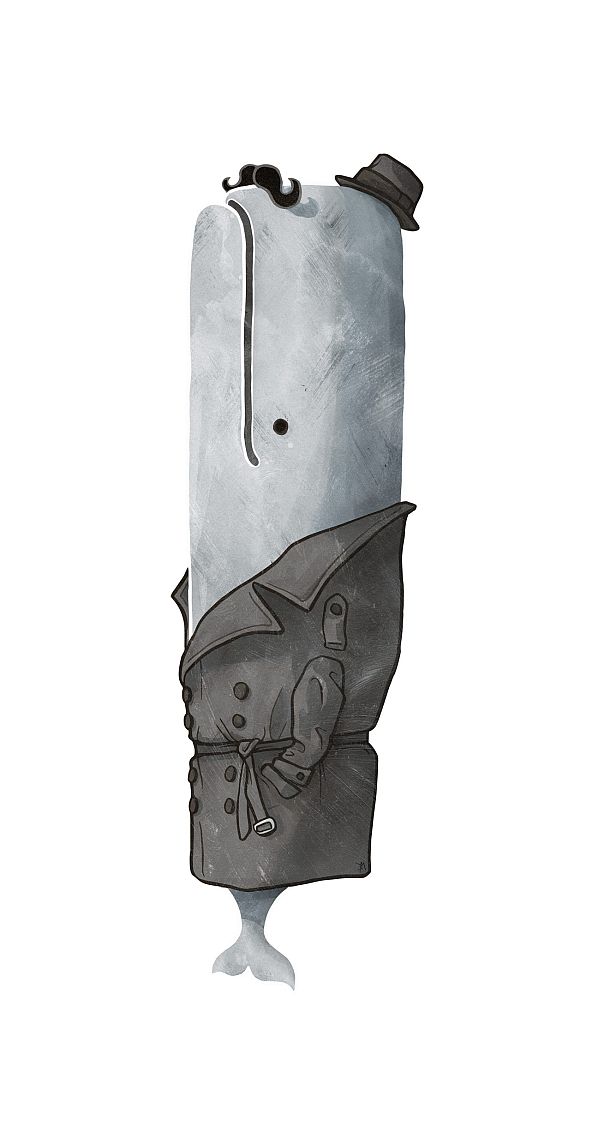 Whales are marvelous creatures. They’re majestic, sea-dwelling opera singers, that also fight giant octopuses… which has to make them the most awesome animals on Earth. The artist uses this whale in disguise to symbolize, in his own words, “fitting-in, infiltration, confidence and surviving as a fish out of water”. 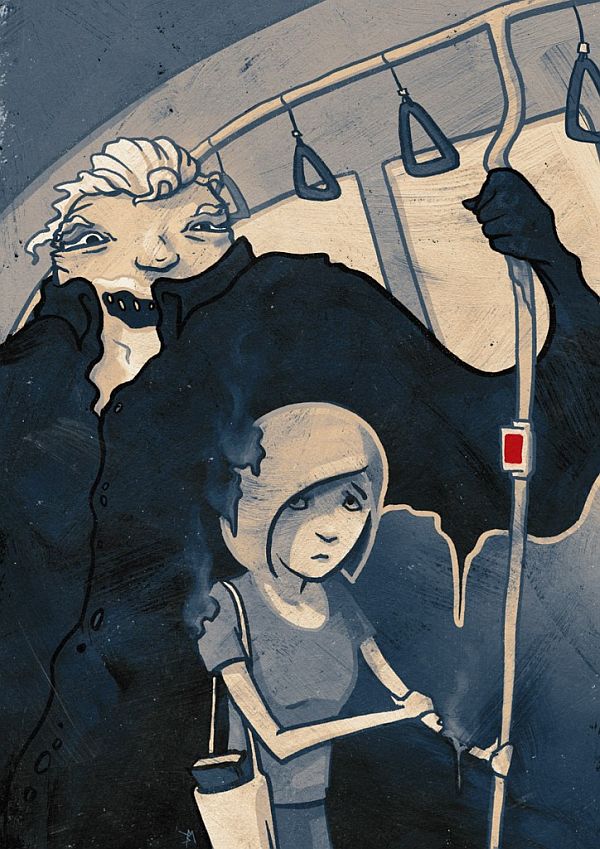 Tharunka is a student magazine, published by the University of New South Wales, the same university that Ben graduated. This is a cover illustration he did for the magazine, on the topic of unpleasant public transportation experiences.

If there’s one place where proper etiquette is a must, than public transport is definitely that place. Here we have a rather obnoxious looking gentleman making a woman feel really uncomfortable, not only by grossly invading her private space, but by also staring intently at her. 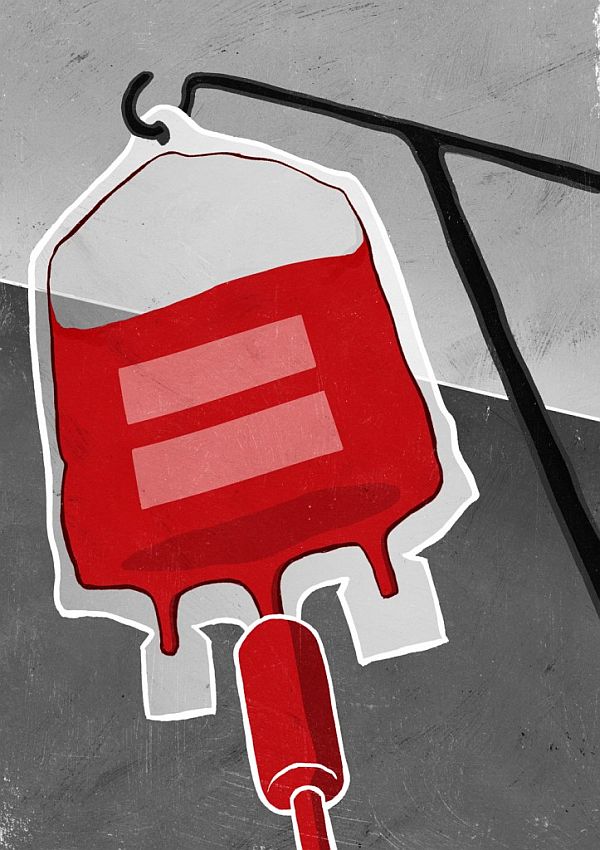 Yet another cover that the artist made for Tharunka, this time for an issue that dealt with blood donation, HIV and equality. Blood donation is a pretty serious issue in Australia, as homosexuals are not allowed to donate blood, if they have engaged in sexual activities 12 months prior to donation. We sure didn’t know about this before seeing this illustration, so you could say that this illustration is a real eye-opener. 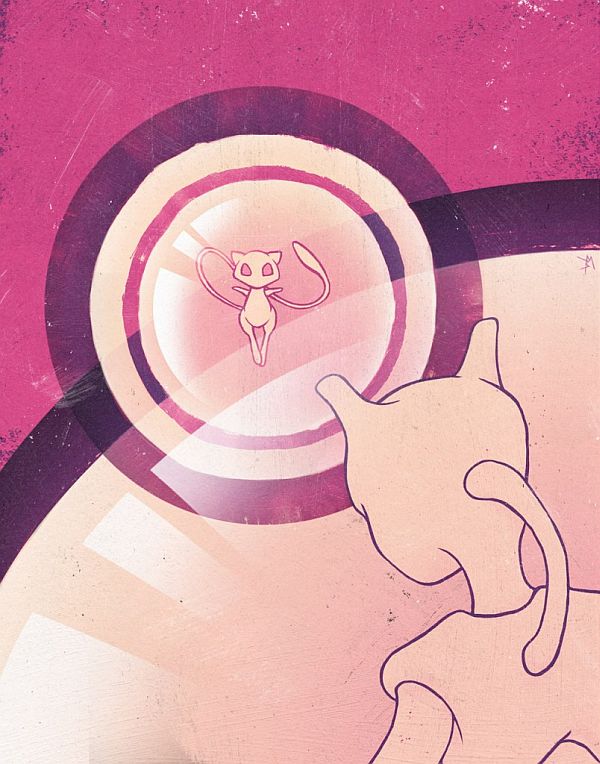 Pokémon is one of the great cultural phenomenons of our generation (assuming you’re not currently 40 years old, then there’s pretty slim chance you are, or ever were, in to Pokémon). It is one of Nintendo’s most prized franchises, so of course it is also the subject of many events. One such event is Battle City, an art show by It’s Super Effective – The Pokémon Podcast, and this is Ben’s contribution to the event. 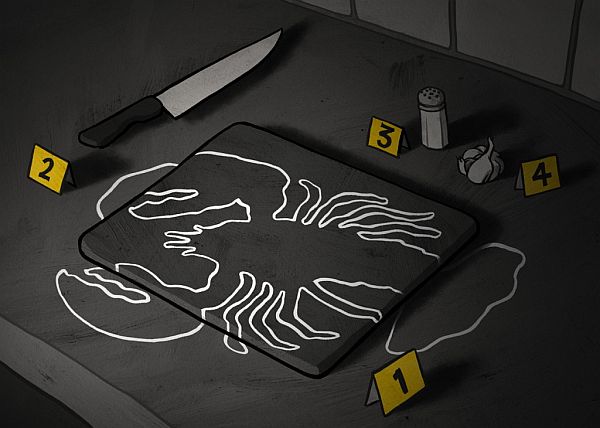 Recent developments in science have uncovered evidence that leads us to believe that lobsters, as well as other crustaceans, can feel pain. As you probably know, the way you cook lobsters is cruel, to say the least, and animal rights and humane treatment isn’t, or rather shouldn’t, be a thing limited only to creatures that are fuzzy and cute. 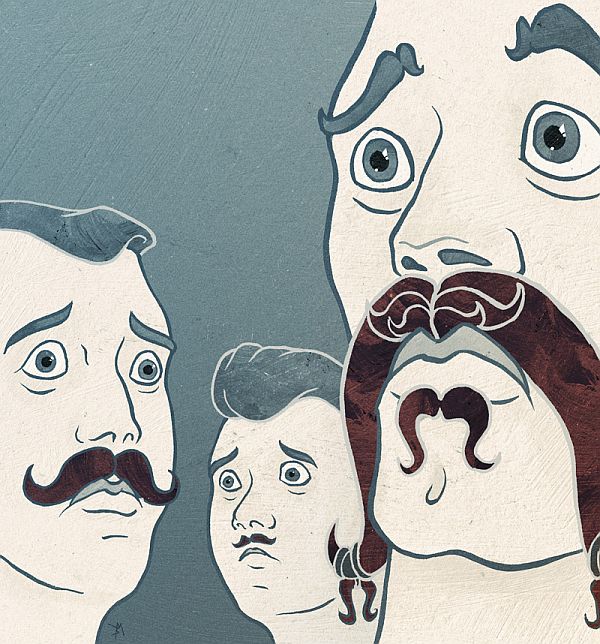 Published in Hysteria Magazine, this illustration is all about envy. The artist himself says it best: “This Illustration is about perspectives, envy and admiration. There’s always going to be someone that does something better. The artists I envy almost certainly envy other artists. The person with a moustache that I envy, is probably envious of an even more spectacular moustache”. We would also like to add that the three moustache owners kind of look like Krieger, from Archer.

That wraps up this week’s Artist of the Week. We hope you enjoyed Ben’s awesome illustrations as much as we did, and that they have inspired you to make your own cool illustrations, drawings or designs. Be sure to check out his website here, and don’t forget to share any thoughts in the comment section below. 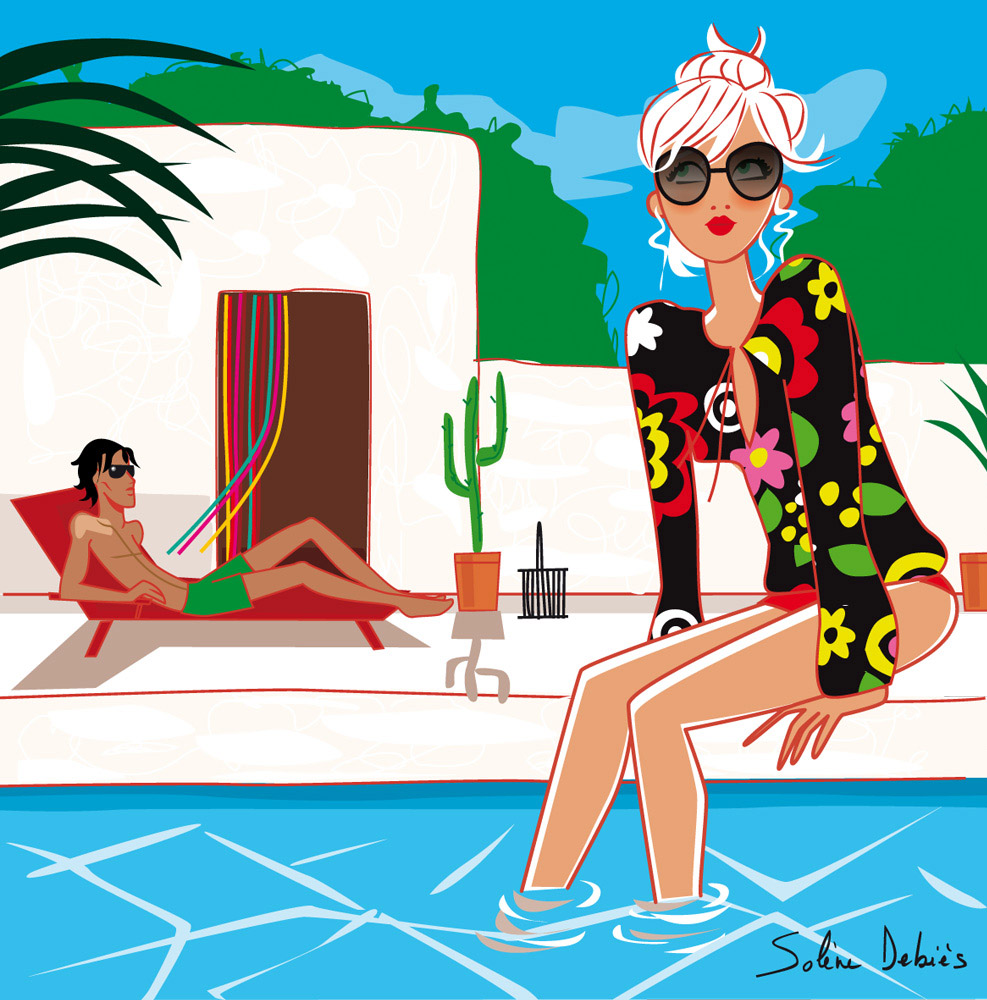 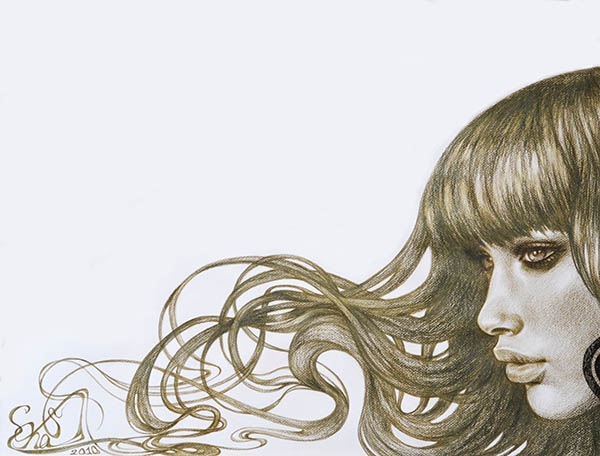 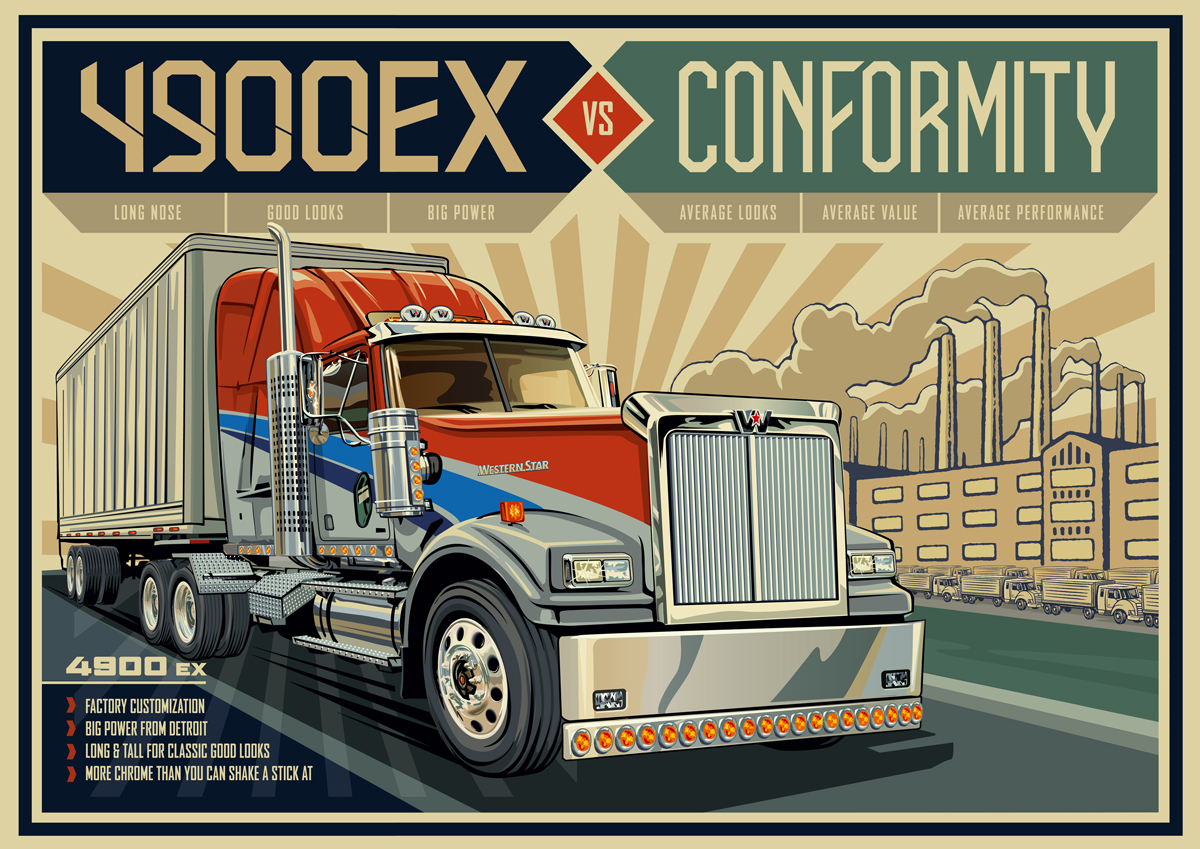 3 Comments → Artist of the Week: Ben Marriott’s Classic Art with a Twist