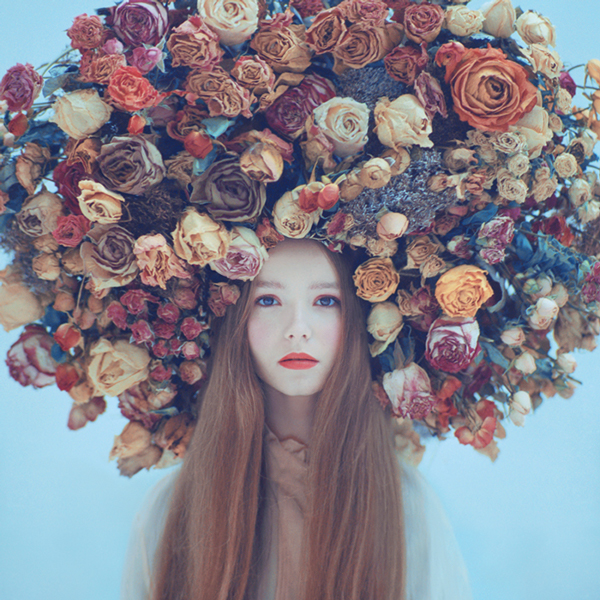 Photography is one of the most fantastic inventions mankind has ever came up with. It is both an art and a science, helping us enrich both our minds and our hearts by capturing small moments for all eternity.

Since the 19th century when photography first became a thing, our love for photography has only grown. We pretty much live in a photographic era, and pictures have well and truly become a big part of our everyday lives.

The first person to truly popularize photography was Louis Daguerre, inventor of the daguerreotype. Using this method, he took the first ever picture of another human being, back in 1838. He done this completely by accident, as it happens, as the person captured in the photo was the only one who stood still long enough to come out clearly in the daguerreotype (he was having his shoes cleaned).

Color photography had to wait quite a while before it could actually be implemented, even though people had been experimenting with it from the very beginning. It was the Lumière brothers who introduced autochrome, the first commercially successful color process in 1907.

It took nearly 70 years to make the leap from monochrome to color photography, and it took only slightly longer than that to the invention of the first digital camera. In 1981, Sony unveiled the Sony Mavica, the first camera that did not require film to shoot images. It was not fully digital, however, as the images had to be viewed on a television, but they were stored on a disk.

The birth of digital photography is actually credited to Kodak’s DCS 100, released ten years after the Mavica, in 1991. It was the first ever commercially available digital camera, but it came with a rather restrictive price tag, so it was mostly used by photojournalists and professional photographers.

All of that preamble might make you think that today’s article is about a digital photographer, but in fact, the artist that we will be showcasing today works with film.

We are, of course, talking about Oleg Oprisco, one of the most talented photographers that Ukraine has to offer.

Born in 1987, in Lviv, Ukraine, Oleg creates marvelous dreamscapes, using very unlikely cameras. As stated in an interview for BoredPanda, he uses Kiev 6C and Kiev 88 cameras, both of which are worth only a fraction of the price big brand cameras have.

The artist discovered his love for photography at age 16, when he started taking photos of friends and acquaintances. Within two years, he moved to Kiev to begin work in advertisement.

“At age 18, I moved to Kiev, where I became an assistant to a well-known advertising photographer. We worked together for four years, but that work did not bring me pleasure. There was no creativity, only commerce.”

After his four year stint as a commercial photographer, he quit his stable job to pursue his true passion, art photography, and we certainly are not using the term “passion” lightly. Working with film means that every element in photos needed to actually exist, so there is no digital trickery involved in his photos. Furthermore, he really does do everything himself.

“I’ve found it ideal to do everything myself. I come up with a concept, create the clothing, choose the location and direct the hair and makeup. Before shooting, I plan the overall color scheme. According to the chosen palette, I select clothes, props, location, etc, making sure that all of it plays within a single color range.”

Although there is no doubt that Oleg’s photos are indeed surreal, his main inspiration is reality, to which he adds bits and pieces to give it that special fairy-tale feel.

“Of course there are my own changes that I add to the reality, such as characters, props, location, and light… I am constantly involved in a search for inspiration and ideas.”

If you want to know more about the artist’s creative process, and what are the tools of his trade, go ahead and check out the interview we mentioned earlier that he did for BoredPanda here.

And now, it is time we showed you why we like his works so much. 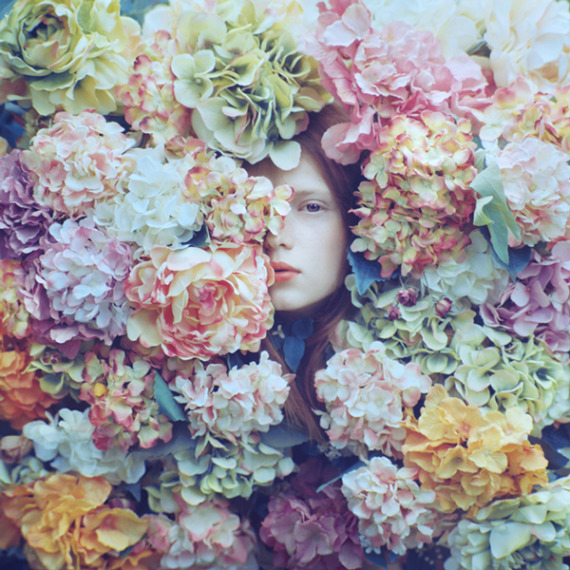 One thing that is always noticeable in Oleg’s photos is the color. Like he said himself, he pays extra attention to the color, and it really shows. Although you could confuse it for your average Instagram filter, the color coordination here is absolutely superb, giving the piece the impression that it is a colored old-timey photo. 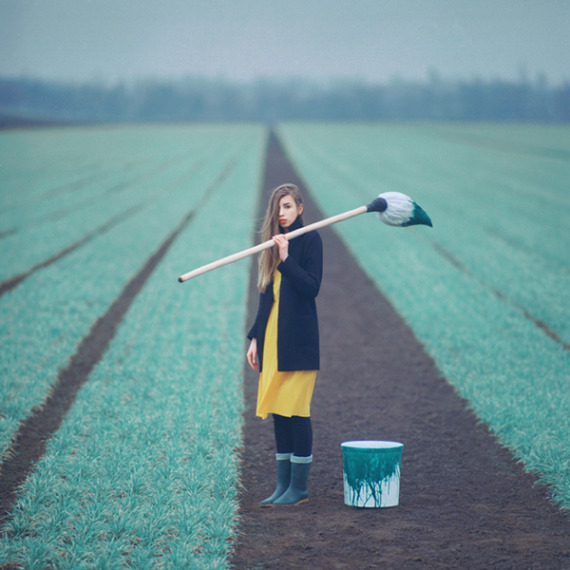 A recurring theme in his photos is changing the size of ordinary objects. Here, for example, he takes a paintbrush, and makes it much larger than it usually is. Once again, the colors really stand out, only this time it is not only for effect, they actually tell a story, the girl holding the brush being the one that essentially “painted” the whole scene. 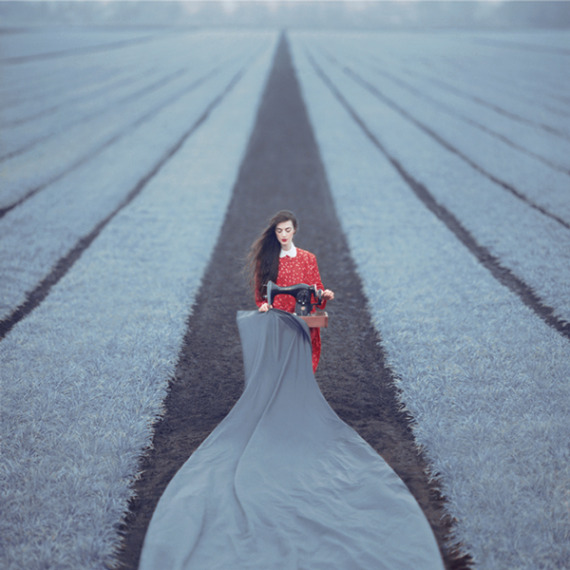 Same as before, only this time it is sewing instead of painting. It might even be a little play on words, seeing as the subject of the photo is sowing (sewing) the field. 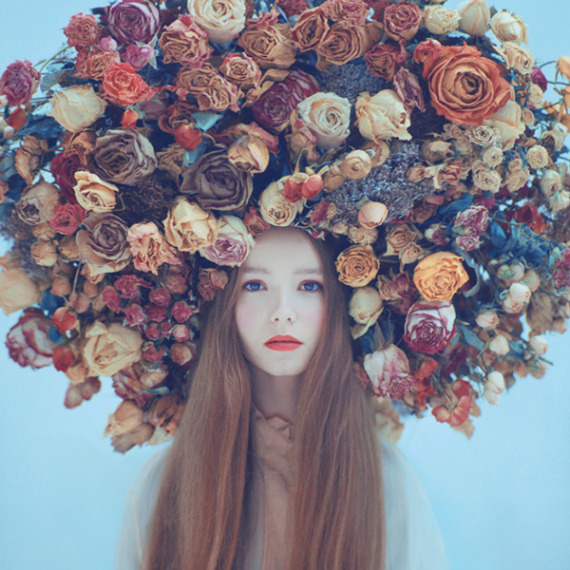 Like in the first item on our list, this image shows a model surrounded by flowers. But it does kind of feel like an inversion from the previous. In the first photo, you could only barely see the model’s face, as the flowers virtually covered her. Here, she wears the flowers like a giant crown. 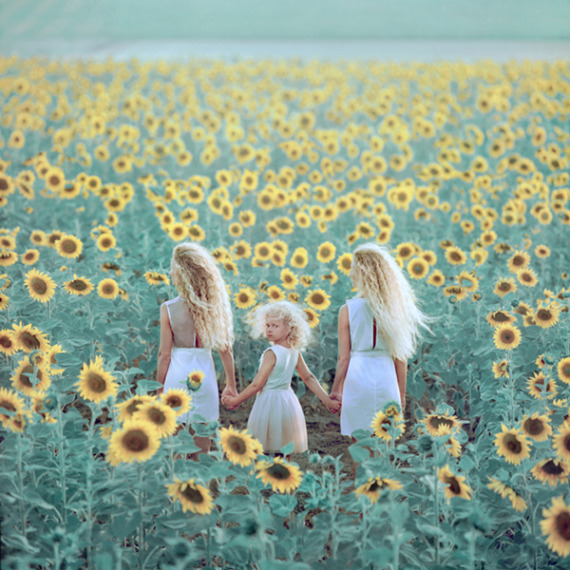 In this photo, Oleg plays with symmetry, and he does it really well. The two girls flanking the smaller one are seemingly identical twins, both blonde, both with wavy hair, and both wearing the same dress and looking in the same direction. The younger girls is in all these aspects, slightly different from the other two: slightly different dress, slightly younger and smaller, and, although her head is facing in the same direction, she is looking at us. 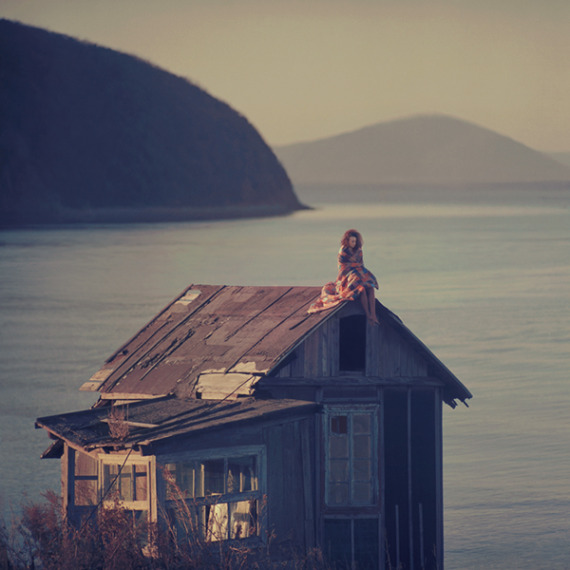 This photo is definitely in our top 5 from the artist, but we would be hard pressed to put them in any particular order. We love the desolate atmosphere Oleg created in this photo, with the decrepit house and the lonely background. The woman sitting on the house gives the impression of sadness, which contrasts wonderfully with her lively-colored dress. 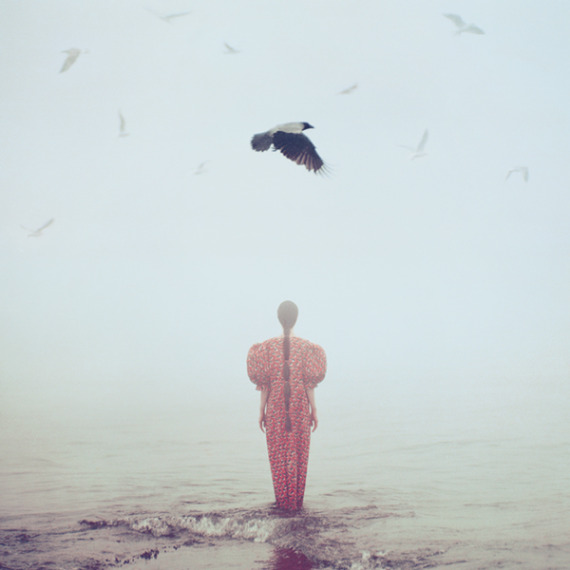 Creating the same desolate atmosphere, this photo has even less elements than the previous picture, and the colored dress contrasts just as well here. The most stunning thing about this photo, we think, has to be the birds, with the way that most of them are almost transparent, except for the one that is just above the model’s head. 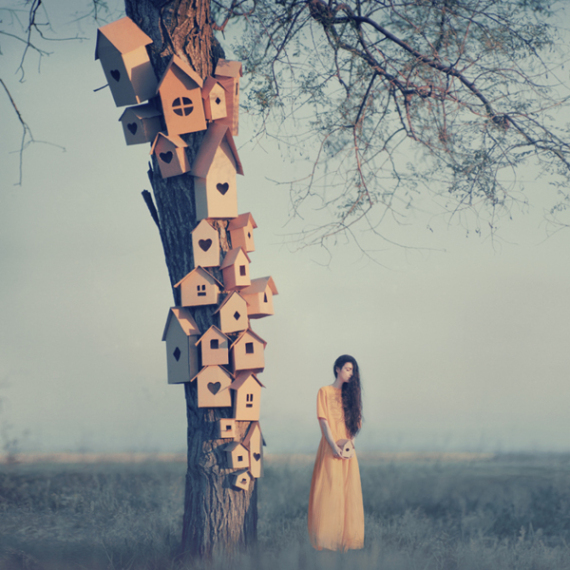 Oleg seems to be attracted to wide open spaces. Here we have yet another scene that takes place on a field, with a long haired girl standing next to a tree filled with bird houses. 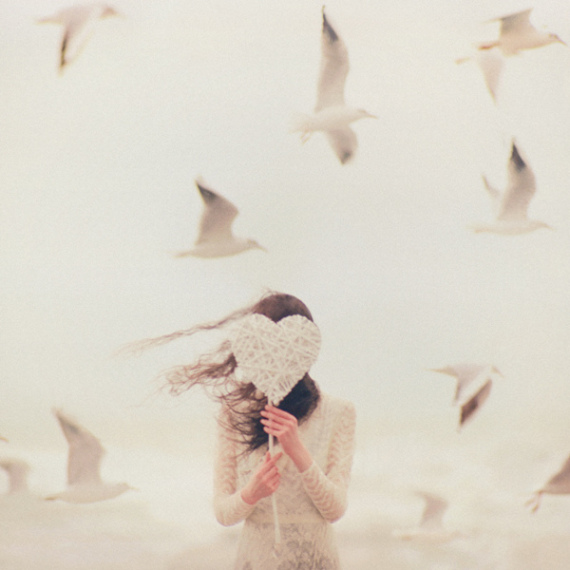 Birds yet again in this picture, only this time we see the artist playing with black and white. The stand out element in this photo is the model’s black hair. 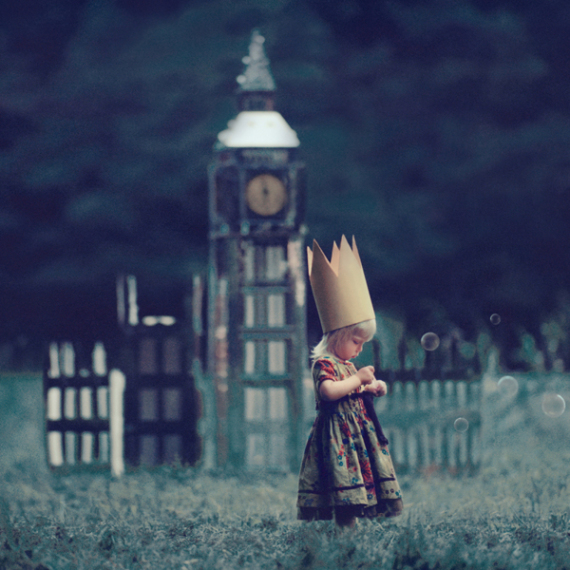 We have said earlier that his works have a fairy-tale feel about them, and nowhere is this more obvious than here. The little girl seems to play the role of a princess, with her kingdom in the background, being much smaller than the wilderness around it. 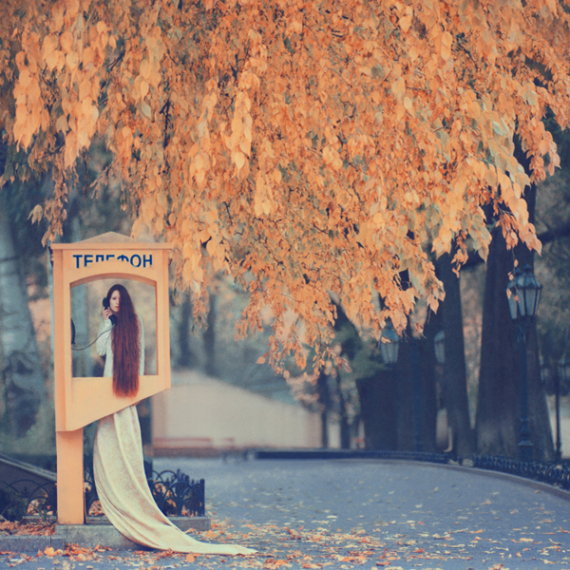 Every artist has his muse, and Oleg’s could well be the girl in this photo. She appears in several of his photos (we have another one on this list), and she really does strike out. Her very long, red hair adds a certain gothic quality to this picture, which yet again looks like a colored old-timey photo. 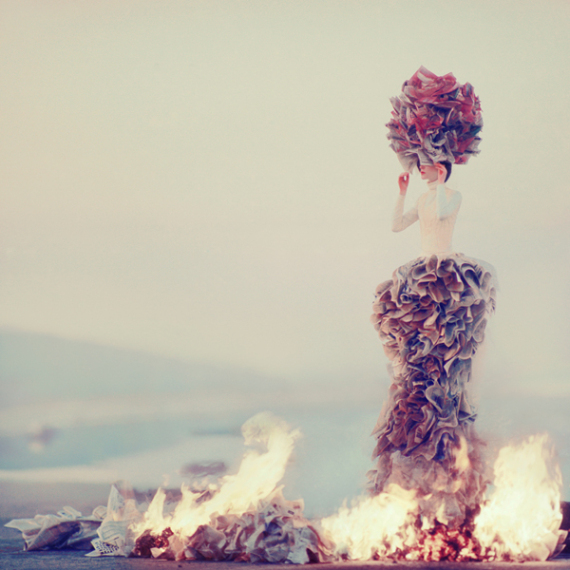 This is one of his most impressive works. Just imagine the time and effort put into creating the props for this image, all for one short shot of brilliance. We also have to applaud the model’s courage for wearing a paper dress in the middle of all that fire. 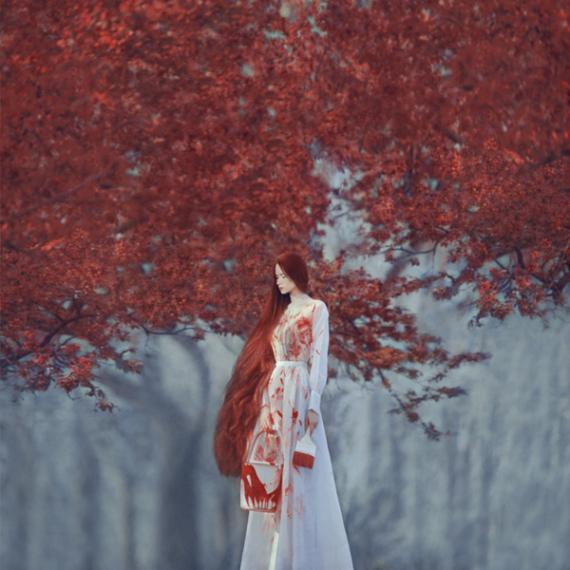 In Alice in Wonderland, the Queen of Hearts has her roses painted red, and she is rather tyrannical about it, as Alice finds out for herself. Classically, we think of the titular character from the fairy-tale as being blonde, but here her hair is of a fiery red. Also, the roses are replaced with the leaves of a tree in autumn.

That wraps up our article on Oleg Oprisco. He is an absolutely marvelous artist, and we do encourage you to check out more of his works. You can do that by checking out his website, or by following him on one of the many other websites he is on, including Behance and Facebook.

Let us know which are your favorites, and what you thought of our article, in the comment section below.