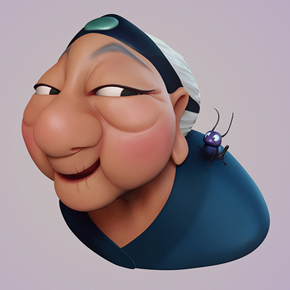 Character design is a tricky thing to master. It’s one of those tasks that seem very simple when you look at them from afar and that turn out to be quite more difficult when you try your hand out at them for the first time.

Most of the characters you’ve seen along the years are extremely simple. Think about most cartoon characters, for one. Well, as it turns out, there’s a lot of work going on in order to properly design a character.

So you have the blank canvas in front of you, and you want to create a great character. How do you go about doing that? It it’s your first time doing that, you probably have no idea where to get started. Don’t worry, though. Help is here! We’ve created a list of 10 tips that will get you started on successfully designing great characters easily.

From Mickey Mouse, Bugs Bunny and Betty Boop to Homer Simpson, Peter Griffin and Finn & Jake, the key element seems to be simplicity. One thing you know you need are clean lines and easily readable features. But there’s a lot more to it than that, as we’ll see further on.

For instance, did you know that the design for Bugs Bunny is based on the “Screwball” archtype? This archtype features an elongated head, a not too big, skinny neck, exaggerated features (in this case, the ears, that reflect the characters’ mood), a pear-shaped body, low forehead and skinny legs.

This archtype is one of many developed by Preston Blair, the guy who literally wrote the book on cartoon character design and animation. He wrote it in 1947 and used the characters he created for Disney and MGM as references. Here are only a few images taken from his book documenting archtypes such as The Screwball, The Cute Character, The Heavy Character and The Goofy Character. You can take a further look at the book over at Animation Resources. 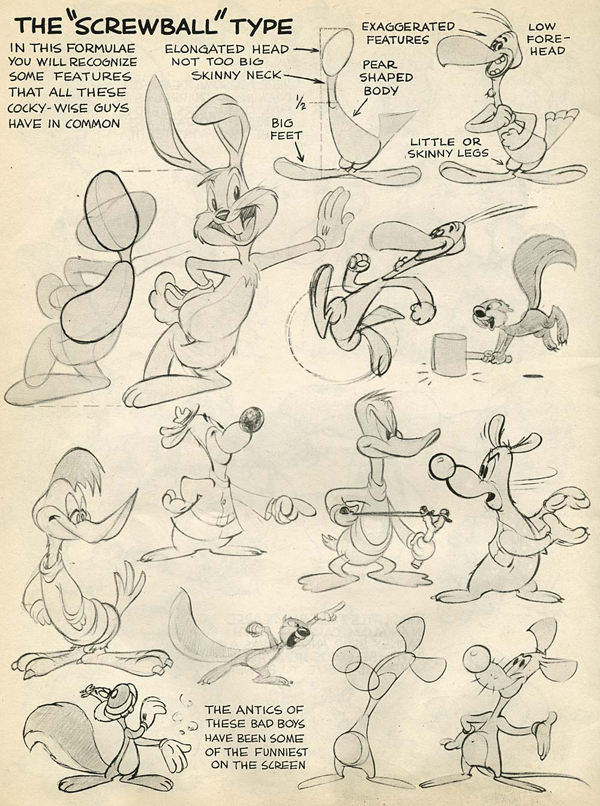 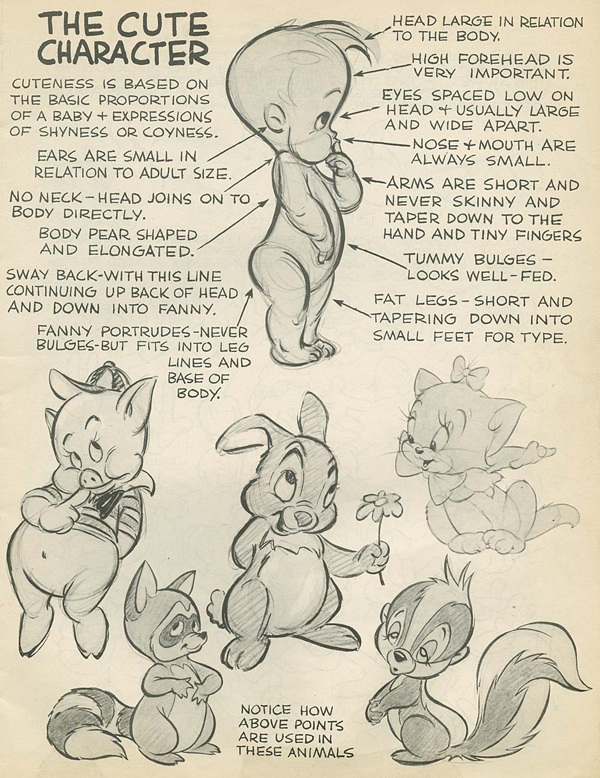 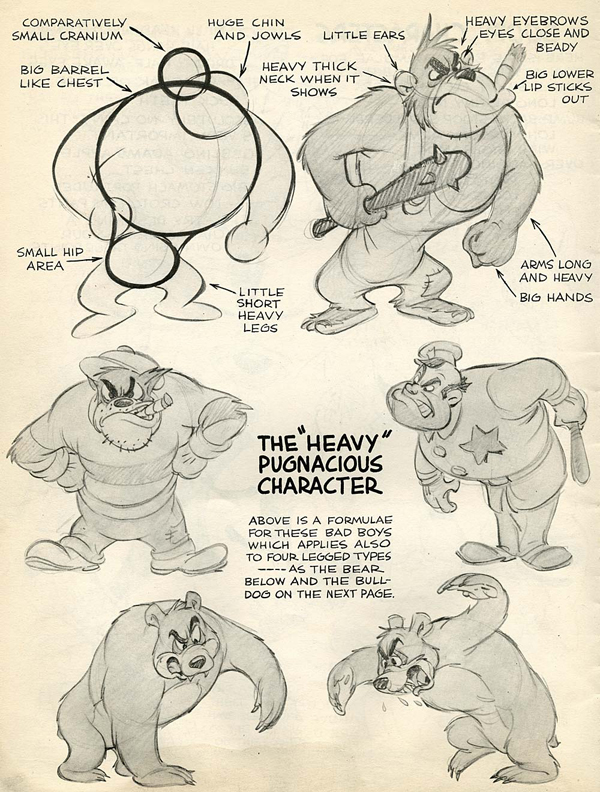 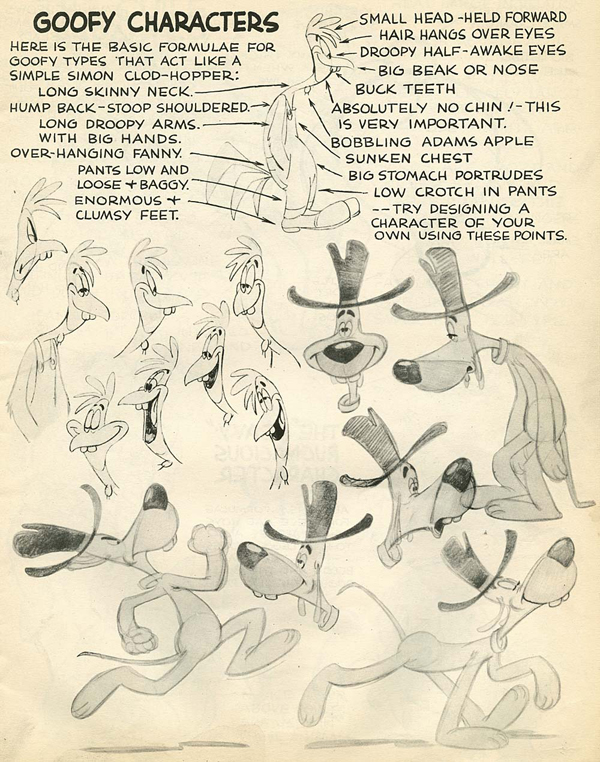 Okay, that’s enough introduction. Blairs’ guide is great, but it isn’t really all that modern, is it? Well, let’s take a look at what you need to do in order to create great character designs in the 21st century.

1. Don’t Use Too Much Color 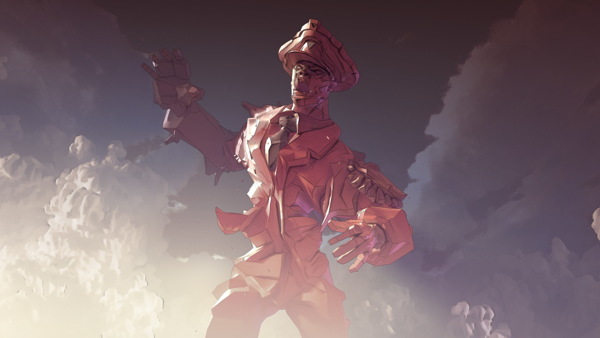 Color is great. A good character will be colored. But take a look at any of the characters we’ve mentioned so far or any of your own favorites. Starting with Elmer Fudd, Bugs Bunny and Donald Duck and up to Scooby Doo and Dexter from Dexters’ Laboratory, all the greatest characters use color sparingly.

This is because too much color will confuse the viewer. When you use many colors, the people viewing your character won’t know where too look at, as you’re providing them with too many points of interest at once. Ideally, you should stick to no more than three base colors and some value variations.

2. Be Inspired When Designing 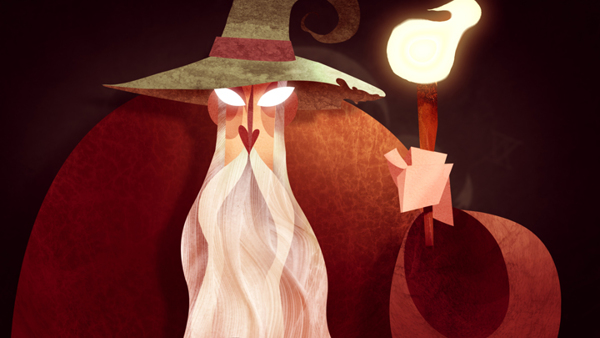 All the greatest cartoon characters are inspired by one idea and one idea alone. Everything about their design serves to further that idea. You can look at virtually anyone, but let’s talk about Gambit from the X-Men. 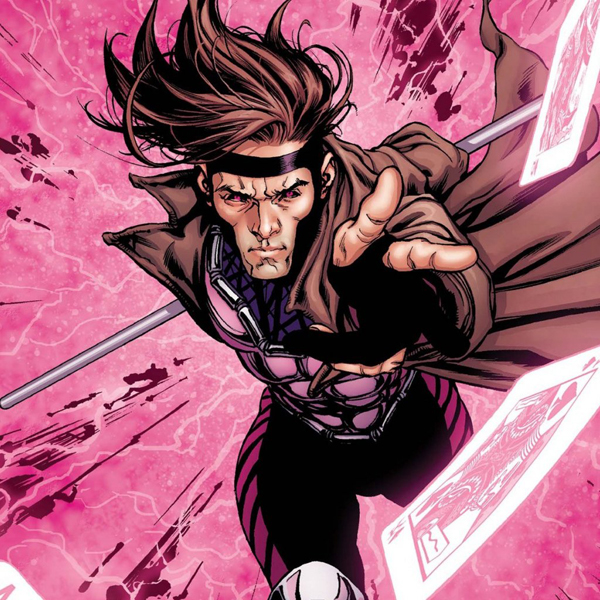 Look at him, everything about the character design tells you what his personality is. He’s been designed as a scoundrel, like Han Solo in Star Wars, or Captain Jack Sparrow in the Pirates of the Caribbean series. All his accessories are made to match his personality. You can tell by his facial features he has quite a bit of success with the ladies, the playing cards accessory only serve to add to his loveable rogue mystique. His weapon of choice (other than the exploding cards) is a staff, proving he has the agility most thieves do, the overcoat furthers his personality as a shady character and so on.

You need to know exactly what the main trait of your character is going to be and make sure everything you include in the characters’ design, from hairstyle, facial features and posture to outfit and accessories, serve to get this trait across.

3. Give Them a Distinctive Shape 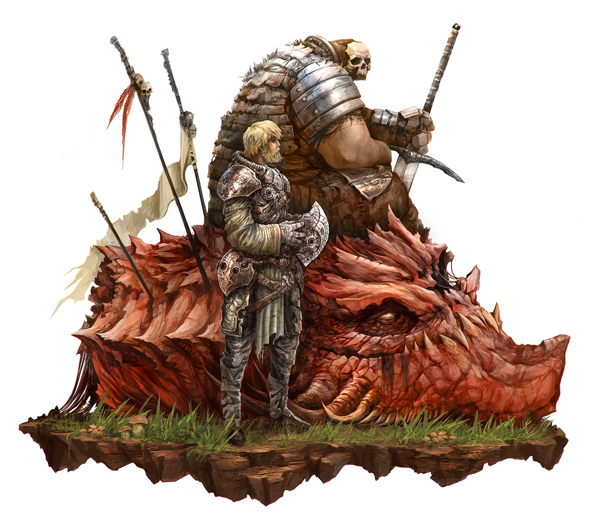 Nothing is more boring than a lineup of characters with the same body type. You need to make sure your character stands out from the others. Ideally, you should be able to recognize your character when presented with nothing more than their silhouette.

Learn to draw different body types. Personalize your characters’ body shape according to their personality and their main trait. For instance, if your character is mostly agile, you should make them small and wiry. If they’re exceptionally strong, you may want to make them look more like heavy-set characters. The illustration above is a great example of different body shapes properly used in character design. 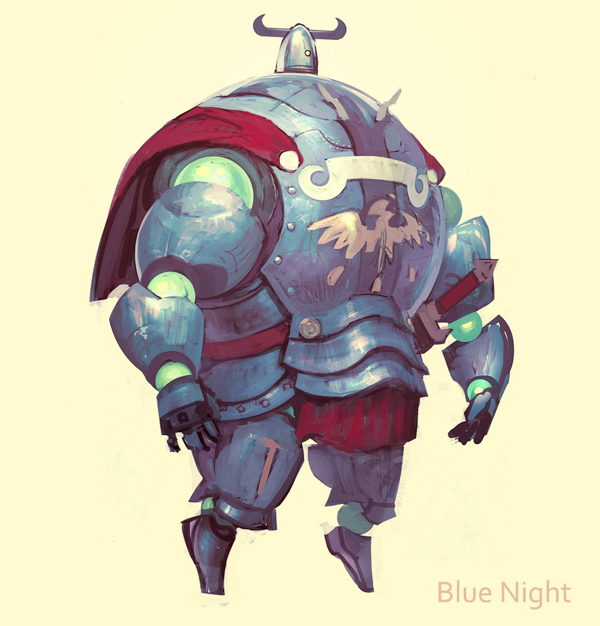 No matter how intricate your character design is, you should be able to break it down easily. That is to say, if you can’t convey the overall shape of your character and clothes in ten strokes or less, then you’re not thinking simple enough.

The best character clothing & design is always simple when broken down. Follow this rule and you’ll have no problems with your character art.

5. Make Sure You Can Draw Them Again 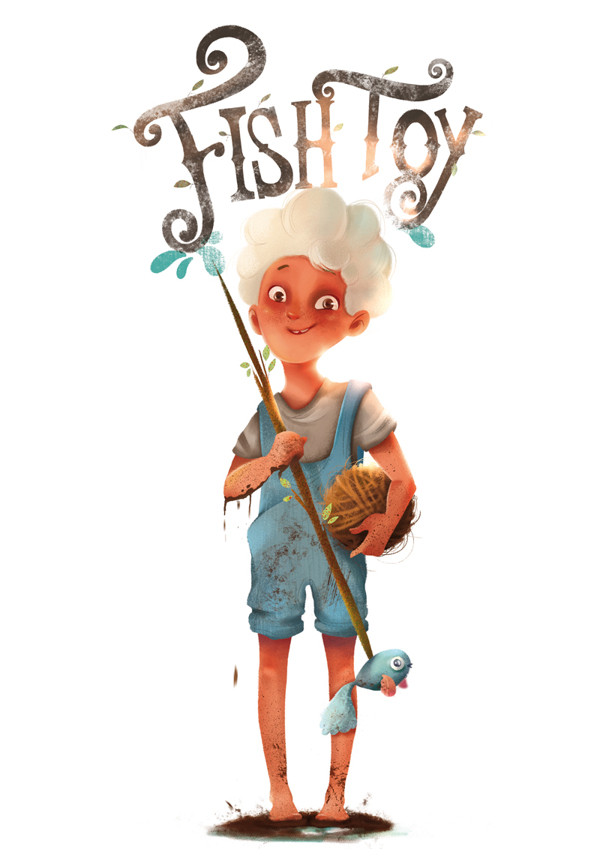 You should be able to draw your characters over and over. If they’re successful designs, you may just have to. Draw them in a few postures, seen from various angles and make sure that drawing them again and again isn’t tedious.

As a rule of thumb, you should stay away from designs that include elaborate patterns on clothing or tattoos. Those will probably be impossible to duplicate and get right from all angles all the time. 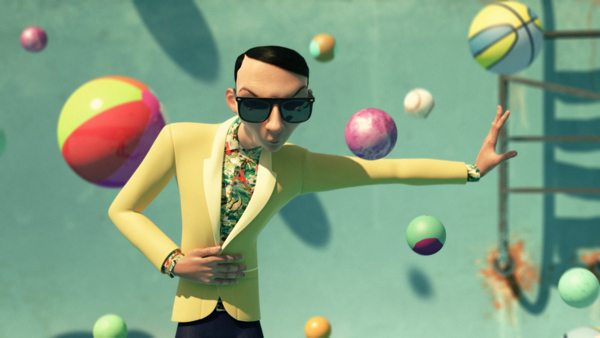 You should definitely exaggerate your characters’ defining features. That will help it stick out and help the viewers easily identify their key traits. For instance, if your character is strong, give them ridiculously oversized muscles. If they’re cool and thin, make them ridiculously thin and give them oversized sunglasses and accessories and so on. 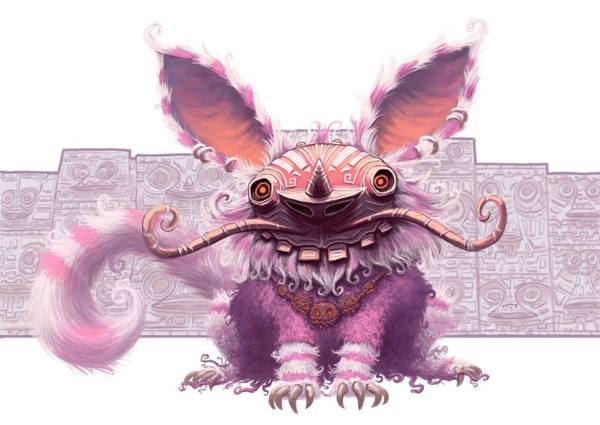 Remember that bit about Bugs Bunnys’ ears we had at the beginning? Well, those ears of his are the primary way the rabbit conveys its emotions. Make sure your character includes certain features that make them expressive and that can help the viewer easily pick up on what the character is thinking or feeling. 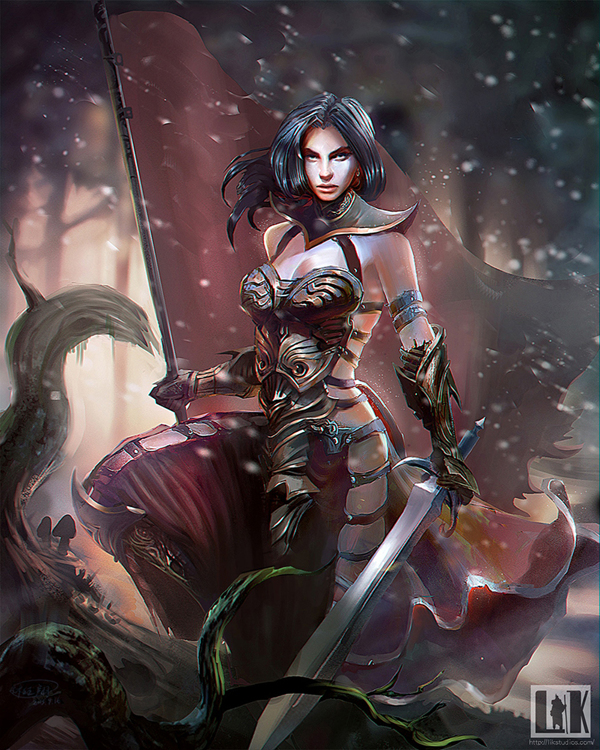 While keeping your design simple is important, so are the accessories. Remember when we looked at Gambit? Most of his personality came through from the accessories attached to their person. You should definitely include accessories that are illustrative for your characters’ main features and their background.

Not only can you convey the characters’ background with accessories (like diamonds and gold to reflect that a character is rich), but they can also show what their personality is. With Gambit, a deck of cards handled adeptly show you he’s a charismatic hustler and one who will not shy away from a gamble. With a pirate, you can make their particular social station much clearer by drawing a parrot on their shoulder.

9. Use Colors to Reflect Their Personality 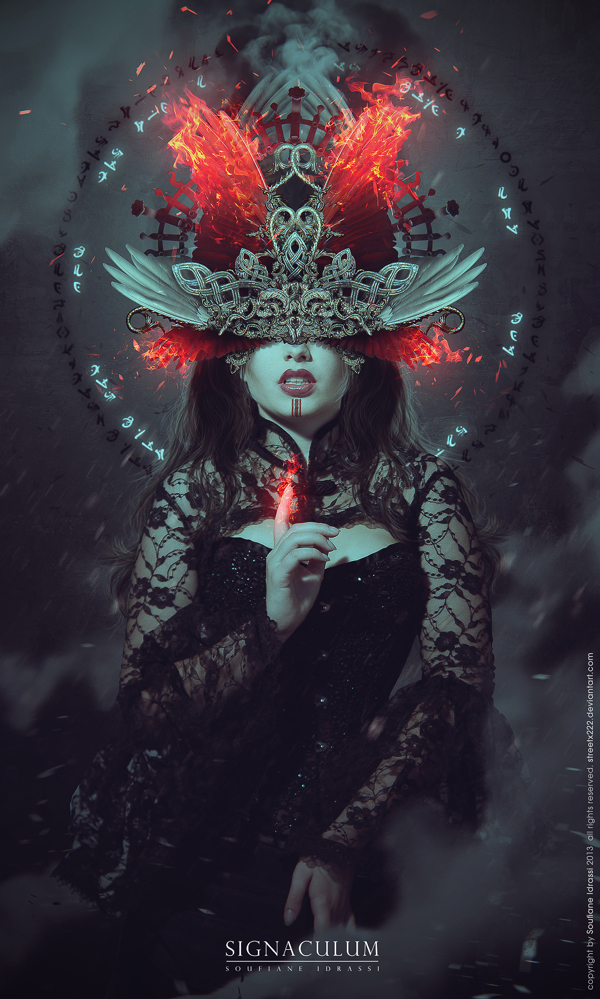 Your characters’ color scheme will tell your viewers what their alignment is. Traditionally, black and dark colors are associated with villains or evil characters, while light colors are associated with the good guys. Use neutral colors to convey a loveable rogue. Strong colors like reds, yellows and blues are traditionally used for heroic characters in comics. Make sure you use the proper color scheme for your character. 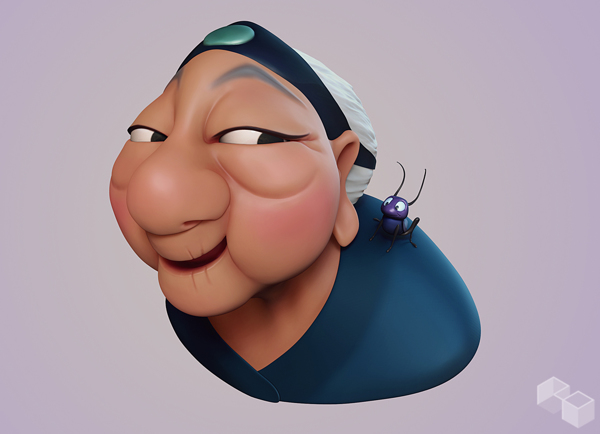 Most importantly, your character must be unique. All their facial features, their body type, their posture, their scars and other deformities should come together to create a completely unique character that you can instantly recognize.

Don’t base this uniqueness solely on accessories and hair, these aspects can change over time. Ideally, you should design your character so you can recognize them even if they were naked and bald.

That about wraps up our list of 10 tips & tricks to create awesome character designs easily. Keep them in mind and you’ll be creating memorable characters soon enough. Now it’s your turn! What are the things you keep in mind when designing a new character? What are your dos and don’ts? Let us know in the comments section below!

If you are a designer or artist looking to build their portfolio, check out Pixpa.com